The last week and a half have been a whirlwind of projects, modelling, and quoting! Albeit, a tired week and a half.
A few of the smaller projects we can't mention, but I will post as soon as we can. The most recent one is a series of 5 posters. The finals come out tomorrow, so I can name names then.
Basically they're a fun project, that revolves around the Holidays. Very Timely indeed!

We were asked by photographer Vicky Lam to create ginger-bread men torturing each other with household kitchen stuff. Nice!

It became apparent very quickly that real gingerbread men wouldn't cut the mustard. So we needed to create some realistic ginger-stunt-men. 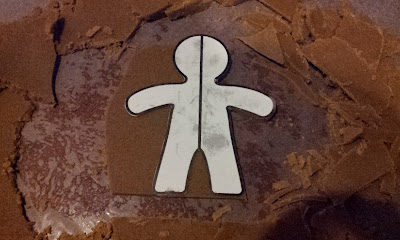 We made up the ginger bread dough, and rolled it all out. I drew up a quick little man and printed him out, slapped him on the dough. Then trimmed him out. I made 3 of them in total at varying thicknesses, so I could choose a hero one after they were baked. 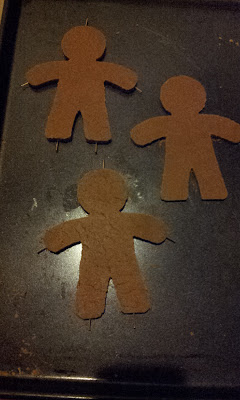 I put brass nails into the arms, legs, and head, so when we make the 2-part mold, I'll have suspension points. The 3rd guy was a little to thin, and I almost wasn't going to use him, but I thought I could grind him up for crumbs on set if we needed. I didn't bother putting the pins in the 3rd guy. 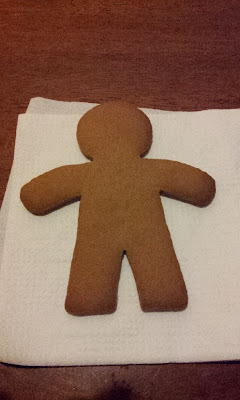 As it turned out, the 3rd one was the best, by a landslide, he had nice texture, and no cracking. DOH! The others looked a bit too thick to me, so the original "throw-away" became the Oscar winner. I ended up drilling small holes in all the extremities for sticking in the little brass nails.

I made the ginger-bread actors at home, due to the fact I have no oven at the shop. I brought home some pvc strips that I could cut up for making the mold box. Just a simple frame, hot glued to a board would do the trick. I traced the little guy onto the board, plugged in the glue gun, and decided to check the layouts on my laptop, one final time. It was at this point, I could here a strange noise coming from the living room. Hmmm......... I decide to investigate. This is where I found the source of the strange noise. At first I thought it was the dog licking himself. It turns out it was the dog chewing down the last of our hero ginger-bread man. The only thing left was a small, neat pile of the brass nails, some crumbs, and a stub of a foot. I only left him for a minute. Nature can be so cruel, so cruel indeed.
I was pretty pissed. But at least I had 2 spares, even though they were my second choice. At least they had the brass nails in them already. 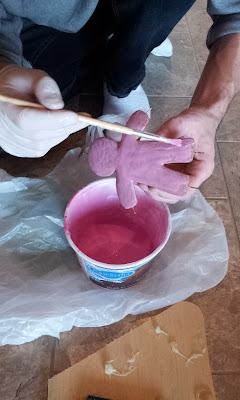 I finished gluing the mold box together, and mixed up the silicone resin. This was carefully brushed right onto the cookie. It looks a lot tastier than it smelled, that's for sure. Brushing it on like this eliminates almost all of the chance of air bubbles curing on the surface of the mold, which would leave small pimples all over the castings. 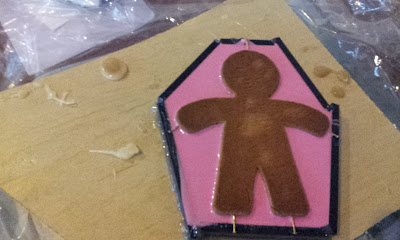 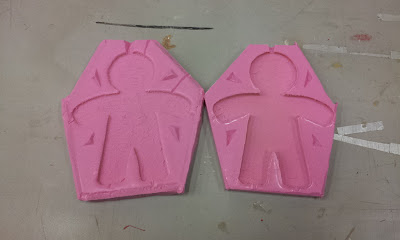 It came out great! Every ounce of miniscule detail was captured by the silicone. The texture was awesome. The whole point of casting the cookies was to give us a super strong material in which to work with. The other benefit was that we could pull the parts, carefully timed, as soon as they kicked, allowing us to bend the cookies into all kinds of poses, thus essentially giving them life to the layouts. 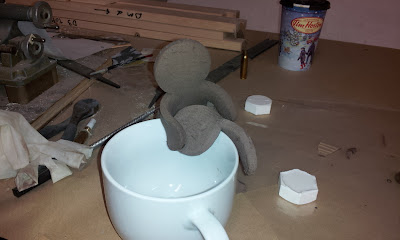 The resin cures to a bright white plastic, so we darkened it up with a few drops of brown tint, while mixing. This would help at painting time, and if the paint gets scratched on set, it won't really matter much. 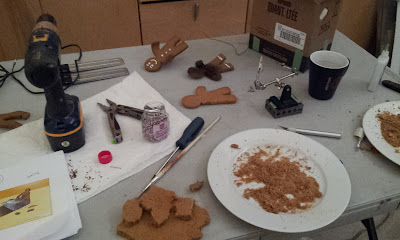 This was my work center for the duration of the shoot at Westside Studio. Sprinkles, icing, power tools and crumbs. This is the worlds best job!

All the details to the ginger-bread men were added on the shoot day with real icing. The nice thing about this is that if I messed up on drawing the faces, I could just rinse them off and start over! 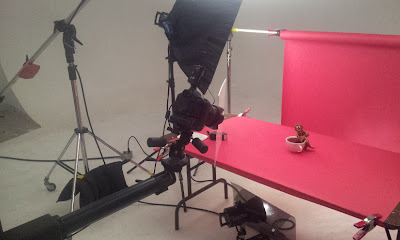 The set was fairly small, with simple backdrops. The gruesome scenes were the focus of the ads. 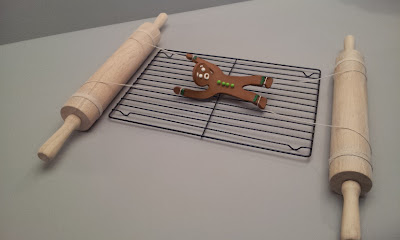 The only character we didn't cast was the stretcher rack scene. I couldn't get the casted guys to bend to that extreme. The solution was to cut the man out on our Techno, using 1/4" pvc. After he was cut, I burned him up with a torch, which gave us the same cookie texture, and let me tweak the shape while the pvc was still hot. Then he got the same paint job as the others. 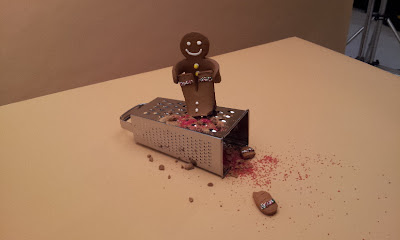 I think the cheese grater murder was my favourite! The red sprinkles really drive home the horror! 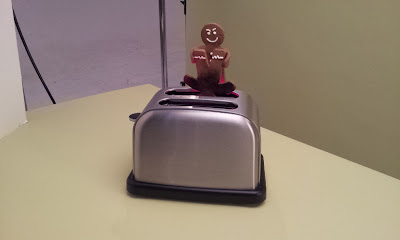 For the ghastly toaster scene, a real toaster was supplied by Vicky. I brought a red LED light, that with some reversible hacking, was able to get into the toaster slots. This shone up onto the cookies, making it look like the toaster was super hot. I blackened the victim cookie with a lighter to add to the horror. 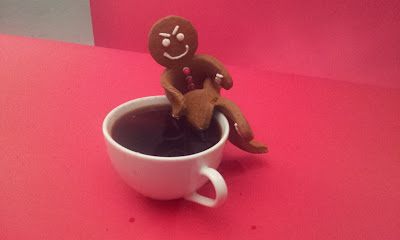 The final shot of the day was the "Death by Latte" scene. One cookie drowning hit man style! While Vicky was shooting this scene, coffee was dripped into the cup via an eye dropper, to give the scene a sense of struggle.

This was awesome! The creative was rock solid, and the job was really low stress, just the ticket after the last crazy ones!

I'll post the finals tomorrow, I think that's when they come out.
8)
JO

Email ThisBlogThis!Share to TwitterShare to FacebookShare to Pinterest
Labels: Fangoria